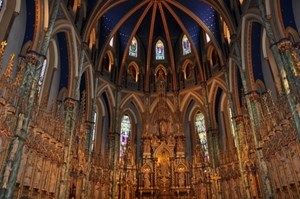 United States citizens aren't really used to religious leaders of any kind getting involved in things like politics or the economy. Even the fact that the dollar has "In God We Trust" printed on the back has been cause for many debates in the last few decades.

It's not that way across the globe. Some other societies function because of the influence that the largest religion in the nation has over the people and government. That being said, a number of people wouldn't consider the United Kingdom to be one of these places.

That's not the case though. Leaders within the Church of England have been heavily involved in providing means of alternative finance to citizens.

According to Reuters, it was recently made public that part of the Church of England's pension fund involved significantly backing Accel Partners, an American venture capital business that has a history of raising funds for short term lender Wonga. This comes after a church leader made disparaging comments about the industry, despite the fact that it was instrumental in helping U.K. consumers during the global recession, when even banks wouldn't extend loans.

The news source said that church leaders seemed to have no idea of their support of the sector and will be looking into the matter to analyze investment portfolios more closely.

Though the Archbishop of Canterbury Justin Welby indicated that he was against short term lending despite its obvious advantages, he told Wonga Chief Executive Errol Damelin in March that he had no intention to back legislation against the industry. Instead, Welby suggested that he was going to look into making the market more competitive.

In fact, Reuters noted that Welby has stated that he plans to allow the church to create not-for-profit financial cooperatives that would offer low interest loans.

"On his ideas for competing with us, Wonga welcomes competition from any quarter that gives the consumer greater choice in effectively managing their financial affairs," Damelin explained in a statement, according to the news source.

Interesting timing
The Associated Press reported that the Church of England has indirectly invested approximately £75,000 in Wonga via shares of Accel. Some of this financial involvement likely has something to do with the firm's ability to raise funds for the short term lender in 2009.

Regardless of Welby's statements, the church was probably involved in helping many consumers during this time. After the global recession began in 2008, many British citizens found themselves struggling heavily with making ends meet. When banks shut their doors to anyone who wasn't a sure thing, a lot of people took to short term lenders, because they continued to provide financial help.

The thing is, these businesses also had to mitigate risks themselves. They couldn't just approve everyone who came through the door during times of economic uncertainty. They took to analyzing applications by looking at alternative consumer credit scores, like the Payment Reporting Builds Credit model. This way, lenders could paint a much more comprehensive picture of potential borrowers than more traditional scores.

This type of score takes a consumer's timely payments on utilities bills into account. On the contrary, many financial institutions such as banks or mainstream lenders only consider regular expenses like this if consumers have missed payments, instances which are often reported to credit bureaus. This way, British citizens can prove that they are responsible enough to be considered credit worthy, as they have a concrete trail of paying off these types of accounts on time.

Using alternative credit scores in this way can give lenders more opportunities to expand their business and help consumers access money in their greatest time of need.