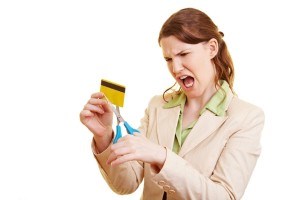 How financially savvy a person is depends on the individual - his or her knowledge, past experience and ability to perform research, for example, will help to obtain the best interest rates. What's more, paying off a credit card - an action that raises a consumer credit score - also depends on the amount a person spends and how much money they earn/have in the bank. However, a recent study by the FINRA Investor Education Foundation found a gender difference in how males and females handle credit card balances, the Baltimore Sun reports. Specifically, the Maryland-based study revealed that 47 percent of male residents carried a balance on their credit cards, compared to 55 percent of women. What's more, 35 percent of men said they comparison shopped for credit cards, while only 30 percent of women said they did so. Interest rate payments were measured on a national level, and women were found to pay a half-percentage point more than men on credit card bills. "Although the half percentage point spread in credit card interest rates between men and women is not a marked difference, over the course of a lifetime a female consumer would pay hundreds or thousands of dollars more in borrowing costs relative to a male with the same demographic characteristics," study authors said, as quoted by the news source. The news source notes in a separate article that a similar study was conducted recently by the National Partnership for Women & Families, which found that the average Maryland woman earns 83 cents for every $1 a man makes - meaning despite females' propensity to have a higher credit card balance, they also have less money to spend. However, a 95-student study on the campus of California-State San Marcos discovered slightly different results regarding which gender has a higher credit card debt, notes Castelar Articles. Students were asked 21 questions pertaining to how many credit cards they own, their total amount owed, their living and educational status, grade level and gender. Researchers found that "contrary to what everyone expected," the average amount male students owed was $1,425 compared to the average female student, who owed $1,307. While the sample size of the San Marcos study is significantly smaller, it goes to show that credit card debt truly does vary by person, and it's important to pay off whatever debt may accrue to maintain or improve upon a consumer credit score.
Credit Risk Management