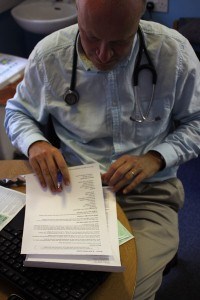 It is becoming very common for students across the United States to opt to either drop out of universities or not pursue higher education at all due to student loan worries. Because of debt, even fewer are choosing to earn graduate degrees, an issue which could result in fewer healthcare providers in the near future. Adding large tuition charges for medical school attendees to the job uncertainty provided by a weakened economy, debt collection agencies could end up attempting to recover student loan debts from people who have the education to obtain one of the highest paying jobs in the nation. Because of the recession, many alumni stopped donating to schools, which lessened the amount in scholarships that a school could dole out. U.S. News reported that the average medical student graduating in 2010 owed around $150,000 in student loan debt after receiving their diploma. Dr. Pauline Chen's New York Times blog explained that over 80 percent of medical school graduates will face student loans, a statistic that has remained fairly unchanged for 25 years, with one-third claiming debts of over $200,000. Chen detailed the reason for overwhelming tuition, saying that facilities are expanding and providing more complex training for students, requiring large and more equipped universities. Additionally, tuition is often used to finance expensive institutional projects. NJ Spotlight noted that there is a growing shortage of primary physicians because new medical school graduates are choosing to pursue high-paid medical fields, such as radiology and oncology to pay off loan debt. Primary care doctors are known to receive some of the lowest salaries in the medical field, the source explained. Many general practitioners can expect to earn an average of $130,000 their first year in the workforce, though most often owe far more in student loans, which presents a major problem, NJ Spotlight said. As the nation's most expensive medical school, students attending Tufts Medical School are expected to pay almost $54,000 per year, and the average graduate owes $202,845 after graduation, according to the school's website. Debt of Tufts graduates, however, can reach over $340,000. U.S. News explained that an education at the least expensive medical school, Baylor College of Medicine, can cost nearly $30,000 per year, though medical school lasts at least 4 years, or longer depending on a student's specialty.
Debt Collections