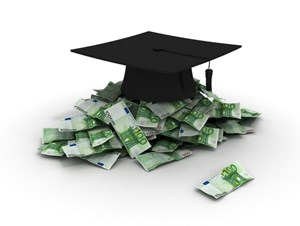 A multitude of twenty-somethings grumble about it every day all over the country, but millions of people buy into it: student loan debt. We live in an age when a college degree is seen almost as a necessity. Many of the more menial jobs in American society call for at least an associate degree at this point, so attending some type of college is akin to a right of passage currently.

Many people don't have the tens of thousands of dollars required to attend a decent school sitting around in their bank accounts, so individuals often take out student loans to contend with costs from tuition to books to housing - all of which seem to be rising year-over-year. However, since the Great Recession upended the economy about six years ago, many graduates find the job market extremely hard to navigate.

Student loans kick in six months after matriculation for most people, and this can begin an ugly downward spiral for these individuals' consumer credit. However, there are other people who just don't want to pay these accounts off, as well as those who forget to settle bills or change their location without giving lenders their forwarding address. In these types of situations, if student loan bills go unpaid, debt collection agencies often have to get involved.

After all, these are legitimate debts that are owed and have to be paid - letting some people off is not fair to the mass of consumers who do what they're supposed to. Student loan debt is often a very lucrative area for recovery corporations, and, to turn a profit and increase revenue, this might be one area in which budding firms should consider expansion.

Success to be had

According to Fox Business, a number of companies on Wall Street are considering attempting to take over debt collection businesses because of the massive profit to be had in the realm of student loan defaults. The biggest advantage? As the source pointed out, it's a perfect storm situation - the job market continues to be questionable, and Americans have $1.1 trillion currently in outstanding academic debt. Moreover, about $121 billion of that sum is in default, after having been considered delinquent for at least 90 days.

Interest - both on the part of Wall Street and debt collection firms that have not yet branched into student loan defaults - is understandable.

Using analytics to contend with the data
Recovery firms with their hands in multiple cookie jars are turning to big data analytics to guide their strategies. And with a lot to gain - and potentially lose - in the student loan delinquency realm, this relatively new technology could be critical.

Banking Strategies noted that these types of tools would be helpful for a number of reasons, not least of which is the fact that their use could ensure more compliance. After all, debt collection agencies need to abide by a number of federal, state and local laws when securing repayment. By incorporating analytics, firm leaders can make getting in contact with debtors more systematized, the source suggested, allowing rules to be more automated and simple to comply with.

On the other hand, big data can be used to recognize patterns, like the most beneficial methods of securing repayment, the strategies that don't work, the locations of debtors who can most likely pay off delinquent accounts and hundreds of other potentialities.

Working with consumers
As many debt collectors are sure to know, they can often see better results when agents are open to working with debtors, rather than mandating repayment immediately. Crafting a plan that works for everyone is often very lucrative, and this is certainly the case with student loan debt.

Consider the fact that a college grad tends to take out a large sum, not a few thousand here or there. One year of college expenses at a private, four-year school can top $60,000, so those with delinquent accounts may consider themselves to be in a significant mess. Debt collectors who are willing to help them figure out a repayment schedule that is manageable may be more successful in their recoupment efforts.

There are plenty of other common methods for recovery agents focused on collecting student loan-based debts, according to a recent Ontario Systems white paper. The accounts receivable corporation pointed out that breaking into the federal student loan recovery market might be a lucrative decision, given the growing number of defaulted federal loans. The source also noted that if firms want to become involved with private loan collection, they should strongly consider coming up with long-term strategies, because it's becoming relatively fractured.