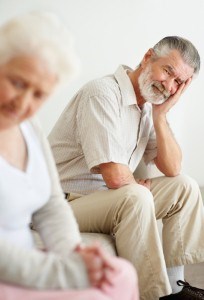 People from all walks of life can become victims of an identity theft scheme. Many don't know their personal information has been stolen until they attempt to open a new line of credit or they are approached by a debt collection agent for an amount they never spent. Criminals in this field are increasingly going after two notable populations - the old and the young. Younger kids are prime targets because their parents usually do not monitor their credit history, as it should be non-existent. However, there are many reasons why seniors may be more susceptible to falling prey to these predators than others. Senior brains may be more gullible Many tend to believe that seniors who have become victims of identity thieves fell into the crime because they are more trusting, which can be a product of the simpler times during which they grew up. However, ConsumerAffairs explained there may be a more scientific reason behind the trusting nature of older individuals. According to the source, citing recent University of Iowa research, when humans advance in age, beginning at 60 years old the ventromedial prefrontal cortex (vmPFC) becomes slightly damaged, increasing trust. "The current study provides the first direct evidence beyond anecdotal reports that damage to the vmPFC increases credulity," researchers wrote in the accompanying paper, according to ConsumerAffairs. "This specific deficit may explain why highly intelligent vmPFC patients can fall victim to seemingly obvious fraud schemes." The source suggested that the study indicates doctors, caregivers and relatives should consider helping their elderly acquaintances with decision-making as they get older, and help keep their financial records secure. However, businesses, lenders, credit card companies and other firms can act as the first line of defense in these situations. How businesses, lenders can help Companies of this type should have strategies in place to try and stop criminals before they can take money out using another person's data. There are many tools at business' disposal to help ensure the validity of forms of identification. For example, Microbilt offers the ID Authenticate product that allows short term lenders, credit card companies and other firms to check a person's background. The workers can access a large public records database and ask the individual trying to get a loan or open a new line of credit things that they would know if their identity is real. For instance, staffers can ask where the person's social security card was issued, what cars he or she owns and in what countries he or she has lived. Tools of this caliber can help professionals catch criminals before they can strike.
ID Verification