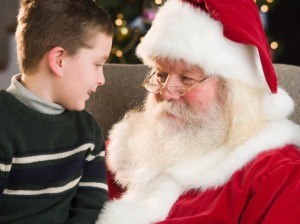 Most assuredly, Santa Claus has failed to follow the Fair Credit Reporting Act as well as the Children's Online Privacy Protection Act which clearly prohibits improper use of consumer information. Santa Claus was recently fined by the Federal Trade Commission for violating the Children's Online Privacy Protection Act and faces $2 million in penalties. In addition, Santa Claus was asked to avoid contact with children. "Mr. Claus has flagrantly violated children's privacy, collecting their consumer preferences for toys and also tracking their behavior so as to judge and maintain a data base of naughtiness and niceness," Jon Leibowitz, chairman of the FTC, said in a statement. "Worse, he has tied this data to personally identifiable information, including any child's name, address, and age. He has solicited this information online, in some cases passing data to third parties so they may fulfill children's wishes. According to unconfirmed reports, he has gone so far as to invade children's homes in the dead of night. He has done this on a broad scale, unchallenged by government authorities for too long."  Children across the world may not understand the dangers of an old, bearded man breaking into homes in the middle of the night, but parents surely do. It would be safer if Santa Claus informed families of his expected time of arrival, as opposed to just appearing on his own agenda. In addition, Santa should ask parents to provide their children's information, instead of stealing it and assuming it's okay. While this story and the statements by Leibowitz were in jest, the FTC does present a very good point that all collection agencies and short term lenders should be aware of. While it's necessary for financial institutions to learn about the backgrounds of their clients, they must also inform them ahead of time that they are conducting such screenings. If credit reports are obtained without adhering to the FTC's standards, then a collection agency could be fined heavily, further tarnishing their reputation within the industry. Aside from maintaining capital and consistent debt payoffs, ensuring trust with the consumer may be one of the more important aspects in the finance sector. A reliable debt collection agency will follow the standards of the Fair Credit Reporting Act and the Fair Debt Collection Act.
Background Screening