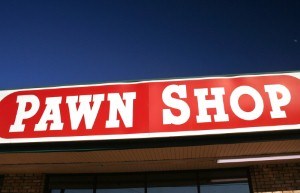 It can't be denied that the emergence of television shows revolving around the short term lending industry have helped boost consumer interest and ultimately increased revenue. Programs like "Hardcore Pawn" and "Pawn Stars" have been particularly popular with reality television fans and have shed light on the industry. Now, shoppers are flocking to storefronts, hoping to tread where their favorite reality stars have helped people before them.  However, some experts are suggesting that what viewers see on TV might be somewhat staged. Only one in a group of many items brought in for pawning or selling is actually historically interesting or worth a lot of money, many believe, and this is often only what's highlighted by the television shows. Though many pawn shops have experienced a resurgence in popularity since the shows began, can consumers expect a similar experience to what they see on the small screen? Not always significant
Pawn brokers may want to tell their patrons that despite what they see on television, they will give loans on items that aren't unique or historically significant. According to Iowa-based CBS affiliate KIMT-TV, local pawn shops that aren't in some of the big cities depicted on reality shows succeed with smaller items. "What we seem to take in the most of is going to be jewelry - high-end watches do really well right now and adversely that's kind of what we sell the most of too," pawn shop manager Noah Wagenknecht told the news provider, noting that DVDs and video games also tend to be lucrative for stores. The majority of storefronts are successful because they offer uncommon items and bargains on household merchandise like televisions, not expensive, historically-significant pieces, KIMT explained. Bring good exposure
However, whether or not pawn brokers' shops are similar to those seen on television, the shows are bringing a lot of exposure to the industry, resulting in more foot traffic in non-famous storefronts. "Pawnshops are the new Target," explained an anonymous pawn shop owner to Boston's NPR affiliate WBUR. The source said that the recent success seen in the industry can be attributed equally to the economic bust of 2008 and the creation of reality shows, which have made the process more mainstream. Plus, because the shows have become so popular, many owners have stepped up their offerings as a result. The news source noted that storefronts are focusing on keeping a clean shopping environment, employees are dressing professionally on the job and other elements are being applied that make the process of pawning and selling items to brokers a more enjoyable experience.
Alternative Consumer Credit Data