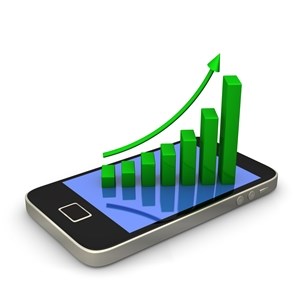 More consumers are using mobile devices to dictate financial decisions these days. From accessing mobile banking applications to researching and buying products with smartphones, consumers are embracing mobility at an incredible rate.

This trend hasn't been lost on enterprises. Over the last several years, companies have been tailoring their products and services to these mobile and online channels, creating e-commerce stores and making apps specific to their brand.

In 2014, the mobile movement is only expected to gain more steam, as additional vendors and enterprises enter to mobile sphere.

According to Business Insider, Dunkin' Donuts is preparing to take on its main rival, Starbucks, in the mobile market as it is set to integrate its DD Perks program with its mobile app. With the new feature, users will be able to make purchases and obtain free products with their smartphones.

Arguably more important in the grand scheme of things is the fact that Apple's CEO Tim Cook recently announced that mobile payments represent a massive opportunity for his company to grow. NBC News reported that Cook expressed a desire to capitalize on the large number of mobile users who are active on iOS products in a fourth quarter earnings call.

"You can tell by looking at the demographics of our customers and the amount of commerce that goes through iOS devices versus the competition that it's a big opportunity on the platform," Cook said, according to the source.

Cook's words suggest that Apple could be looking to leverage a comprehensive mobile payment solution that would be accessible to all iPhone users. The source asserted that the company has what it takes to compete with other mobile and online payment giants such as PayPal and Isis. One of the main reasons Apple is so well-positioned is because of the ongoing success of the iTunes store.

With hundreds of millions of iTunes users already having their credit and debit card accounts connected to Apple, the organization could easily kickstart its mobile efforts by leveraging iTunes effectively.

On the surface, this appears to be a positive development for the mobile payments sector. As more vendors and companies start to embrace the movement, it's more likely that the technology will become mainstream, right? Not so fast.

Common strategy more effective
In its sixth annual list of most pressing electronic payment issues released in November 2012, Digital Transactions highlighted the case of the Merchant Customer Exchange (MCX), a mobile payment partnership struck by some of the nation's largest retailers.

In the article, Digital Transactions outlined the early growing pains faced by the organization. In particular, the source explained how some of the smaller vendors were concerned that larger enterprises such as Wal-Mart would garner too much control of MCX.

While it was a major concern, the organization obviously figured out a way to create a balanced management model, giving all members an equal say in policy creation. Today, MCX is still active and adding members at a rapid rate.

Seen as a more cost-effective alternative than working with traditional credit card companies, a number of high-profile companies joined forces with MCX in 2013 alone. GAP, Southwest Airlines, ExxonMobil and Chili's are just a few of the organizations that became MCX members last year.

This is the optimal model that will ultimately see mobile payments become more widespread. Rather than segmenting mobile solutions by brand or company, vendors should make a joint effort to figure out a way to make mobile payments more viable.

From placing industry-standard payment portals that accept all devices at stores to reducing the cost of using such technology, a common approach is needed to make mobile payments more popular. A segmented sector will do little to make mobile purchase points appealing to consumers.