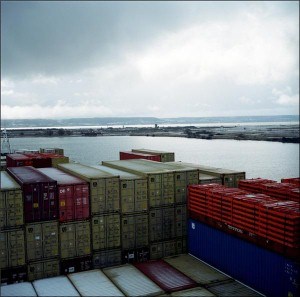 The maritime industry, which carries 90 percent of the world's traded goods, is on high alert in the wake of Osama bin Laden's murder. However, investigators from the Government Accountability Office recently released a report stating that they were able to obtain counterfeit Transportation Worker Identification Credentials and gain access to secure port facilities. This, despite the fact that New Jersey Senator Frank Lautenberg stressed that TWIC cards require fingerprinting and federal background checks to ensure workers have legal employment status, aren't mentioned on terrorism intelligence databases and have no history of crimes. "Fraudulent and counterfeit cards like the ones used by investigators could also be used as identification at airports or military facilities," Lautenberg explained. "The problems don't stop with fraudulent cards. There are also issues with criminal background checks, immigration checks and a lack of safeguards to determine if an applicant even needs a TWIC card." CNN adds that the undercover government investigators were able to drive a vehicle containing a simulated explosive into major U.S. seaports by simply flashing the phony credentials. Florida Republican candidate John Mica explains to the media outlet that 10 years ago the Transportation Security Administration was instructed to issue biometric security cards to its workers to eliminate the need for guards to visually examine credentials. A readable system has yet to be approved. "Nearly half a billion dollars has been spent since TSA was directed to issue biometric security cards to transportation workers," said Mica. "Yet today, TWICs are at best no more useful than library cards." West Virginia Senator John Rockefeller plans to address legislation in the coming months to address the shortcomings exposed by the GAO. In Florida, however, Port of Palm Beach officials are confident that their security system won't let intruders slip through the cracks. The port has advanced ID verification cards and multiple checkpoints across the facility. Every time someone swipes their badge, their photo pop ups on a security screen and identifies the area which they're going and their level of authorization for that area, Ken Hern, head of security, explains to WPTV-TV.
ID Verification