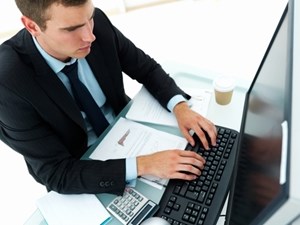 Data breaches continue to be among the biggest threats facing all types of companies today, especially those that handle sensitive data such as healthcare and financial organizations. Hackers have become far more proficient at circumventing lackluster security standards, finding vulnerabilities and stealing personal or corporate information to obtain fraudulent payments.

ACH cards and wire transfers have made the issue a bit more complex, especially as many companies are still relatively new to automated payment processing. Cyber criminals are highly opportunistic in nature, and will most often try to pick the low hanging fruit long before an elaborate and difficult scheme to steal from highly protected environments.

As such, businesses need to ensure that security protocols are on par with industry-recognized best practices, and aligned with any regulatory compliance statutes. Executives should never underestimate the skills of hackers, and should work to go above and beyond the call of duty when it comes to protecting sensitive information, networks, systems and accounts.

Hacking on the rise

Out-Law, an online publication managed by Pinsent Masons, recently reported that hacking is involved in a majority of data breaches, a fact that was revealed in Verizon's recent 2013 Data Breach Investigations Report. Data and network security should never be overlooked, as one breach of sensitive information can lead to substantially damaged reputations, incurred financial losses and even sanctions from federal law enforcement agencies.

According to the news provider, the report looked at roughly 47,000 security incidents from the last year, and focused on the 621 events that each had at least 44 million records lost. Of those more devastating and widespread data breaches, hacking was the source of more than half. The findings of the report only seemed to get worse with time.

For example, the source cited that Verizon noticed a harrowing statistic regarding who identified the breaches. External parties were responsible for unearthing 69 percent of the breaches, meaning the organizations that were attacked were generally in the dark until a different entity discovered the issue. These are often the most damaging breaches, as hackers can continue to steal information before they are detected.

Out-Law added that more than three-quarters of the breaches involved weak or stolen credentials, which translates to poor password protections, authentication capabilities and access controls. In short, this study revealed how behind most organizations are in the fight against cyber crime.

The news provider noted that Verizon's researchers implored decision-makers to take a customized approach to data and network security, as each firm will have a unique set of requirements to keep all information, including data transferred through ACH cards and wire payments, protected.

How much does it cost?
Mobile Enterprise recently explained that the cost of data breaches continues to increase, with some studies showing that the average price tag of compromised information hitting $500,000 among larger enterprises. According to the news provider, the rise of mobile devices is one of the biggest and most advanced threats to corporate security, especially as employees are using personal smartphones and tablets to access and store sensitive information.

The source noted that small businesses have a proportional threat, with 45 percent of companies which have 1,000 or fewer staff members paying $100,000 for each data breach.

All of the information that should push enterprise decision-makers to bolster security capabilities and monitor ACH card activity is readily available. Executives need to understand that the costs of implementing proactive and comprehensive defenses are small prices to pay for the security that comes along with such investments.

Maintaining oversight of all accounts payable and receivable, while regularly updating firewalls and other security software will minimize the risk of data breach.