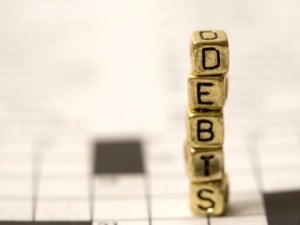 There's no doubt about it: Consumers are in debt. According to recent data released by the U.S. Federal Reserve, outstanding revolving credit, which includes credit card debt, reached an astounding $801 billion in December. Meanwhile, a number of studies have shown that the total volume of student loan debt is now greater than that of credit cards. And earlier this week, Bankrate.com reported that roughly one in four Americans has more credit card debt than emergency savings. So what does this mean, other than plenty of work for debt collection agencies? Well, for one, consumer sentiment is not likely to skyrocket anytime soon, although it has been improving mildly in recent weeks. This may prolong economic stagnation, but the overall market remains difficult to assess. This is because higher debt sometimes alludes to improved spending trends and market confidence. Then there's regional considerations. Recently, credit rating giant Equifax unveiled its list the top 10 most debt-ridden cities in the U.S. The data are based on which cities' residents owed the highest proportion of average yearly income to credit card firms in the fourth quarter of last year, according to The Street. The Virginia Beach region of Virginia was at the top of the list, with average credit card debt per household reaching $5,980. That is 11.5 percent of average income owed to credit card companies. The second most indebted city is El Paso, Texas. Average dues per household hit $4,123 in the fourth quarter, reflecting 10.89 percent of average household income. Fayetteville, North Carolina, took the No. 3 spot, with households averaging $4,361 in credit card debt, which makes 10.55 percent of average income. Miami, Florida, took the No. 4 spot, followed by Colorado Springs, Colorado; Scranton-Wilkes-Barre, Pennsylvania; Honolulu, Hawaii; Anchorage, Alaska, and Montgomery, Alabama, respectively. However, Equifax noted, the percentage of income Americans owed to credit card companies fell by among nearly 60 of the top 100 metropolitan statistical areas (MSAs) in the fourth quarter. "It is interesting that MSAs from some of the states hardest hit by the recession showed some of the biggest reductions in credit card debt," Trey Loughran, president of Equifax's personal solutions business, told Dow Jones Newswires. "This suggests that consumers from these hardest hit areas have been especially cautious in their spending and diligent in paying down their credit card debt."
Debt Collections