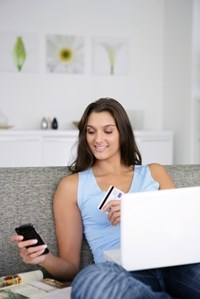 Ecommerce may still be a relatively new and novel concept, but that hasn't stopped it from taking the payments sphere by storm. Only a few years ago, buying household necessities from the Internet instead of the grocery store or purchasing items with the flash of a smartphone would have seemed unbelievable to many consumers. But as the technologies that make these practices possible have advanced, so has the public's willingness to embrace the ever-growing number of transactional possibilities. According to a recent study from Forrester Research, the online retail market is set to see massive growth by 2017, and these developments are largely being driven by better devices.

Ecommerce is growing up

Forrester found that ecommerce in the United States could represent a $370 billion industry by 2017, Mobile Commerce Daily reported. If the estimate pans out, this figure would account for approximately 10 percent of all retail sales in the country. This potential for growth is likely to affect the market this year, Forrester noted, with revenues from online and mobile payments projected to grow 13.4 percent in 2013 from last year, reaching $262 billion.

Mobile is currently one of the most influential players in the ecommerce sphere according to Forrester's study, and its role may be a multifaceted one. Mobile Commerce Daily noted that the firm discovered mobile to be far more than just an alternative point of sale terminal to shoppers. Instead of using their smartphones and tablets just to make payments, Forrester found that devices are highly effective when it comes to influencing sales.

"Consumers are more likely to use their phones not only to research purchases - both to learn about products and store options - but also to find the best price for a given item," Forrester noted in its report. "But it's not just phones that drive retail web traffic; virtually all retailers report that traffic to their sites from tablets spikes during evening prime-time hours, when consumers are in a leisure state of mind. This also suggests incremental web sessions and conversions, because web retail traditionally spikes not in the evening, but during business hours."

This may mean that one effective way for vendors to harness ecommerce growth to their advantage is to funnel more of their budget into developing their online presence, including through special offers, more helpful websites and social media initiatives.

Additionally, TechCrunch noted that American consumers aren't the only ones buying more frequently online. According to the source, Forrester's data suggested that, while ecommerce is not currently used in equal frequency by all regions of Europe, adoption is likely to become more widespread by 2017, with southern Europeans likely to join northerners in using the tools regularly over the next few years. Especially in the markets where ecommerce has already become a popular solution among shoppers, European providers are entering a new era in their electronic payments development where the focus will shift from stimulating initial adoption to facilitating more personalized shopping experiences through platforms and apps.

Precautions
One thing that electronic payments developers may find productive to focus on worldwide is better securing consumer transactions. When identity theft incidents occur and ecommerce users' consumer credit data takes a hit, the result may be major losses in terms of revenue and trust. In order to support this market's growth, creators should take steps to ensure that shoppers are safe. If increased security does not accompany advances in personalization and ease of use, progress could eventually stall.