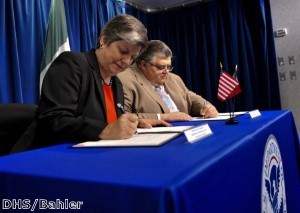 The federal government recently announced that it was launching a new pilot program to help verify the identity of workers, using more advanced background screening technology. The Department of Homeland Security has begun looking into creating an identity verification program to cut down on the number of undocumented workers used by firms across the United States. Though there are already systems in place, including the E-Verify system, many illegal workers are able to get past them by using stolen Social Security numbers. The system would force those looking to gain employment to answer questions about personal history as a way to ensure that the person was not trying to beat the system. At a recent news conference, Secretary of Homeland Security Janet Napolitano said that in a few areas of the country, those looking for employment could already use the new system as part of a pilot program. "Beginning today, for the first time, individuals in five states and the District of Columbia will be able to check their own employment eligibility status before seeking a job," Napolitano said. "This new service is voluntary, is fast, is free and, importantly, is secure." In addition to cutting down on the number of illegal workers being hired, the new "Self Check Out" program will seek to improve the current system by correcting any current errors. The program, which is being run by U.S. Citizenship and Immigration Services, a division of the Homeland Security Department, will work to rectify any worker whose citizenship has been inappropriately questioned by the E-Verify procedure. Some members of Congress welcomed the news, which would make the screening process for employers more accurate. Congressman Lamar Smith, chairman of the House Judiciary Committee, which oversees the E-Verify program, said that the new measures would help build on past success and combat illegal workers taking jobs from those who are in the country legally. According to the U.S. Immigration Services' website, employers must verify the legitimacy of their workers using the E-Verify program. The free service, which has come under fire from some, seeks to cut down on the number of undocumented workers and verify the identities of others seeking employment.
ID Verification