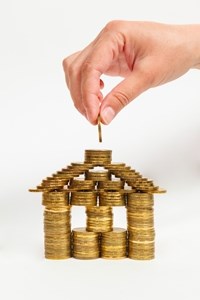 During and after the financial crisis six years ago, millions of homeowners fell underwater as home prices were slashed. As a result, many likely pulled back on spending while they waited for the value of their property to recover.

In recent years, price appreciation has been strong, which is reflected in the declining negative equity rate. As more homeowners get above water, they may be more willing to spend.

In the third quarter, 791,000 residential properties returned to positive equity, which brought the number of underwater homes down to 6.4 million, compared to 7.2 million properties in the previous three-month period, according to CoreLogic analysis.

"Rising home prices continued to help homeowners regain their lost equity in the third quarter of 2013," said Mark Fleming, chief economist for CoreLogic. "Fewer than 7 million homeowners are underwater, with a total mortgage debt of $1.6 trillion. Negative equity will decline even further in the coming quarters as the housing market continues to improve."

Despite the improvement, many states still have a high negative equity rate. Nevada led the way at 32.2 percent, followed by Florida, Arizona, Ohio and Georgia. Collectively, these five states account for 36.4 percent of underwater homes in the United States.

With more favorable consumer conditions, spending could pick up in the coming months. However, people may be putting themselves at financial risk by parting with more cash.

If an unexpected expense arises shortly after a major purchase, consumers may find it difficult to cover all of their monthly bills. You can never predict when you will end up in the emergency room, so it is important to be prepared. Not everyone has the financial means to create an emergency fund, so short term lending could prove beneficial.

When a bill payment is missed, there is a high likelihood of costly late fees and penalties. To avoid such an outcome, people can rely on short term lending in this type of situation. A short term loan can provide funds quickly and allow consumers to stay current on the essentials in a time of financial hardship. People who are worried about the cost of this type of lending should compare it to what would be charged if a payment is missed on a monthly bill.