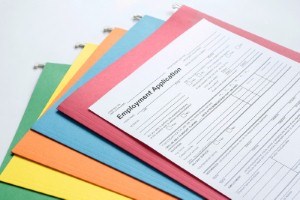 Currently, application forms for jobs in Cumberland County, North Carolina, ask prospective workers if they have ever been convicted of a crime other than a minor traffic violation, the Fayetteville Observer reports. However, county commissioner Charles Evans recently requested that Cumberland join the Ban the Box movement, which removes the criminal history question from applications. "We're not suggesting by any means that we forgo any process to conduct any criminal background checks," assistant county Manager James Lawson told commissioners at a recent meeting, quoted by the news source. "Obviously we will apply due diligence and make responsible hiring decisions." Lawson added by removing the question, the county ensures that there's no perception of bias for previously convicted individuals during the interview stage. According to the state Justice Center, five states - Connecticut, Massachusetts, Minnesota, New Mexico and Hawaii - have already passed Ban the Box legislature, while 21 large cities have removed the question from applications. The Herald-Sun reports that neighboring Durham's hiring policy doesn't allow interviewers to ask about criminal convictions until a job offer is made. The city is looking for the General Assembly's permission to pass an ordinance that enforces the same rules on private-sector employers.
Background Screening