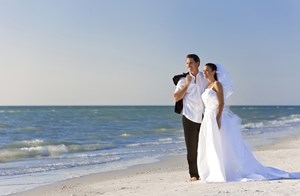 There are a number of choices that have to be made and things to consider before two people say "I do." After the successful proposal, people have to do things like pick a venue, decide whether they want to marry in a church, choose what will be worn during the ceremony, think about where they're going to live after marrying and dozens of other factors.

Something that can't be forgotten is finances, however. Some people might think it's kind of cool to open up a joint checking account and mix together all things good and bad. That said, the credit score is something that couples need to discuss. For various reasons, one partner's score might be vastly different from the other's. Maybe one of the two people involved racked up a lot of debt in his or her college years, or perhaps he or she forgot to pay off a credit card and is still seeing the consequences.

Regardless, people need to be aware of what it means to join in a union, at least financially. Lenders also have to be cognizant of these changes. There are certain things in someone's financial profile that are going to affect his or her spouse, but there are also elements that won't be a big deal for the other person.

The truth behind a score

When people get married, their credit scores don't immediately form one overarching score. Nor do these rankings reflect poorly on either spouse - each partner keeps his or her score despite the fact that they've exchanged vows, according to Experian. The news source said that separate credit reports will always be maintained by credit bureaus.

That said, both good and bad financial decisions made on joint accounts where both people's names appear will affect each party equally, the news provider detailed. So if a credit card with both names on it is defaulted on, both partners will feel the sting of a lower credit score. Lenders should be aware that when loans are taken out in both names, either party can be contacted in a situation of nonpayment.

This can also present a unique opportunity for short term lenders to capitalize on. Some people expecting their credit scores to soar because they married someone who is fiscally responsible will likely be disappointed. However, that does not mean the end of the line for them in terms of opening a new line of credit. They can still find relief from alternative financiers, as they often have more loan approval leeway. For instance, they tend to rely on things like Payment Reporting Builds Credit scores, which also take into account things like a positive history of making payments to utilities companies.

At the end of the road
When a spouse passes on, this can be a stressful time in terms of finances. Family members might have to amend certain accounts, transfer names on accounts or loans, or a whole slew of other actions. Lenders and credit bureaus can expect to run into this situation every so often, because sometimes accounts need to be paid off.

When joint accounts or lines of credit are being used, they often need to be paid off, though regulations tend to vary from state-to-state, Michigan State University Extension reported. The source said that some states require the estate or the surviving spouse to pay off any debts if the deceased individual's name was on on them. Therefore, all lenders need to know their area's laws when a case like this arises, information that can commonly be found via the Federal Trade Commission or local credit bureaus.