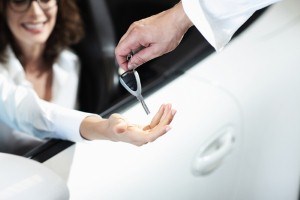 With credit card, medical and student debt being fixtures in the news recently, one may be surprised to learn that March is predicted to have been a record month for new automobile sales. MSNBC cited rising gas prices and high costs of used cars as reasons why Americans turned to dealerships to purchase new, fuel-efficient cars last month. Consumer confidence made March the highest month for car sales since 2008, the source claimed, detailing that major car makers Ford, Chrysler, General Motors, Nissan, Toyota and Hyundai all saw American sales increase. The recession had resulted in the worst car sales figures since World War II, MSNBC explained, but the climb out of the financial hardship is making it easier for Americans to obtain loans to finance the new vehicles. According to Consumer Reports, even Americans who have not seen an improvement in personal finances now that the nation is pulling out of the recession can afford vehicles, using alternative finance avenues. For example, consumers can finance a car using home-equity loans, home-equity lines of credit and credit cards. Credit unions and other short-term loan businesses are also good sources of finance for those in need of fast money.
Auto Industry Financing