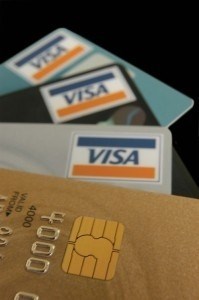 According to the Standard & Poor's/Experian Consumer Credit Default Indices, default rates on bank credit cards decreased from July to August. Large banks - including Chase, Discover, American Express and Bank of America - all reported fewer defaults and delinquencies in August, credit card industry analysis site LowCards.com notes. Furthermore, charge-offs and late payments have also declined steadily since August 2010, indicating that borrowers are still conservative with their lending habits. "While there were some moderately mixed results, the overall picture is broadly optimistic," David M. Blitzer, managing director and chairman of the Index Committee for S&P Indices, said in a statement. "Bank cards traditionally have the highest default rate so the decline is a good sign." In addition to declining default rates, credit card balances are also dropping. The Federal Reserve Consumer Credit Report explains that revolving credit dropped by $3.4 billion in July. Laurance Kotlikoff, professor of economics at Boston University, nutshells these statistics for the Fiscal Times by saying bankers are still suspicious of who they lend to, and prefer high quality borrowers who are less likely to default, meaning they're the ones getting all the loans.
Credit Risk Management