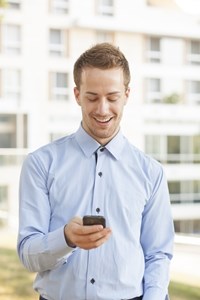 The electronic payments sphere has seen a wealth of changes in the past few years, and one of the most important of those may be the rise of mobile payments. While many consumers may know that using their smartphones and tablets to make purchases is an option, this transaction method still hasn't reached the mainstream in the same way as using credit, debit or ACH cards. Some commerce experts believe it may be only a matter of time before this happens, and large-scale mobile payment adoption is not far off.

Silicon Republic reported that at the recent AIB Merchant Services (AIBMS) Conference in Dublin, Ireland, approximately 150 ecommerce and mcommerce experts and vendors discussed how mobile payments are likely to soon become many consumers' favored purchase method as long as the industry continues to move forward.

"Consumers, retailers and technology developers will see mobile payments becoming mainstream within the next four years," said AIBMS general manager Nigel Motye, according to the source. "Consumers will insist on mobile loyalty rewards and coupons, making their mobile shopping decisions based on this."

Jon Rutter, director of product management for mobile solutions at First Data Corporation, added that in order for retailers to support this vision, they need to develop strategies and use their technologies to improve customer relations. He pointed out that more than 80 percent of the world's consumers currently use mobile devices in their daily lives, even doing a good deal of their social networking from these gadgets instead of via laptop or desktop computers. By using websites like Facebook and Twitter to market offerings or disburse deals, stores may be able to bring in more customers and appeal to the connected demographic.

Recent data from Gartner backs up Rutter's claim that many people worldwide are embracing opportunities to use mobile technology. In a report, the research firm predicted that global shipments of PCs will decline by 7.6 percent in 2013 from 2012, while smartphone, tablet and ultramobile device sales will increase significantly. Nearly 2 million phones are estimated to be shipped, compared to only slightly more than 340,000 home computers. Gartner forecast that this trend is likely to continue over the next several years, through at least 2017.

Benefits on the horizon
With more people buying mobile technologies, mcommerce has a potential to touch a wide range of individuals. For consumers who already have credit cards, this likely means hooking up their plastic to their devices and taking advantage of opportunities to pay more even more conveniently. For populations like the unbanked, many of whom use prepaid tools like ACH cards, mobile payments tools could present opportunities to more easily reload these payment solutions, as well as manage their finances with greater accuracy.

Philip O'Reilly of University College Cork's Financial Services Innovation Centre explained at the AIBMS that merchants need to recognize their role in driving the innovation that will bring mcommerce to all consumers. However, there is still work to be done in enabling retailers to make the best offerings possible.

"There is demand in the ecosystem for multiple payment technologies," O'Reilly said, as quoted by Silicon Republic. "Contactless payments will, in the coming months, be incorporated into national policy. Yet, for consumers, the mobile payments ecosystem is still fragmented. There is a lack of standards and a lack of clearly communicated value propositions."

The success of mobile payments depends on retailers and technologies vendors working together to develop a clear vision of how to best serve the desires of a market clamoring for change. If they continue to forge onward, it's likely that consumers will latch on.