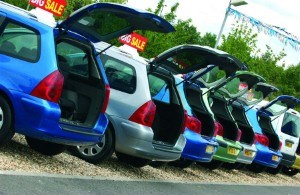 Auto lenders across the United States are seeing growth, with loans on new and used cars increasing. A new report from Fitch Ratings entitled U.S. Auto Asset Quality Review 4Q11 found that the auto loan and lease credit sectors saw a large upswing in 2011 and is expected to continue to grow in 2012, benefiting lenders' commercial credit reports.  The report detailed that auto sales rose by 9.5 percent from 2010 to total 12.7 million units in 2011, and predicted that between 13.5 and 14 million units would be sold by the end of 2012. Moreover, the study noted, auto lenders reported a low amount of delinquency on car loans and charge-offs, the lowest it has been in a decade. Fitch Ratings also predicted the auto financing industry to be stable throughout 2012 due to a rise in sales volume, performance of recent loans and the overall recovery of the American economy. Supporting Fitch's claim is Kelley Blue Book's recent Book Market Report for March 2012 that foresees the sales of compact and hybrid vehicles increasing in 2012, as they saw a 20 percent rise in 2011. Part of the reason for the prediction of increased sales is the fuel efficiency of the vehicles in the face of rising gas prices. During the last week of February used compact sales rose by 1.3 percent, while used hybrid sales saw a 3.6 percent increase, the most popular purchase being the 2010 Toyota Prius. Alec Gutierrez, KBB's senior market analyst of automotive insights, explained that, due to past market trends, fuel efficient used cars could see an increase of up to 20 percent in the coming months because of rising gas prices. The Washington Post attributed the increase in the occurrence of borrowing from auto lenders to low interest rates, citing an SNL Financial study that found auto lenders in the capital region saw an increase in portfolios increase by 3 percent to $31.5 billion. A recent Experian report found that interest rates on auto loans are at their lowest since 2008. "Lenders are clearly on much more solid ground than they were two or three years ago," Experian's director of automotive lending, Melinda Zabritski noted, concluding that "with more lenders aggressively competing for business, it's a great time for consumers to buy or finance a vehicle."
Auto Industry Financing