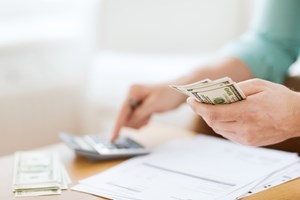 The credit invisible are any individuals without data filed in nationwide credit reporting agencies. They may be immigrants whose foreign credit scores don't apply in the U.S., millennials wary of traditional credit products, or individuals who simply have difficulty accessing credit.

In 2015, the Consumer Financial Protection Bureau discovered there are 26 million Americans who are credit invisible. That's a huge loss for lenders, who depend on traditional credit reports to assess people's ability to repay loans.

The question is, does rent and utility data provide lenders with enough context to predict individuals' creditworthiness? PERC, a company that provides information to drive solutions, analyzed consumer credit data, utility and telecommunications payment histories and debt settlement outcomes between July 2009 and June 2010 to determine the efficacy of using utility and telecom payment histories to assess creditworthiness. The study discovered the following:

These and other findings demonstrate the value of using alternative credit data to inform lending decisions. PERC's analysts concluded that if lenders consider utility and telecom information either in conjunction with or separately from traditional credit scores, they could expand their crediting businesses by 5 percent without incurring additional risk.

One of the biggest testament's to alternative credit data's usefulness is that it enables lower-income individuals with thin-file or no-file credit reports to acquire wealth. Property, appliances and other goods increase people's standard of living, enabling many to rise out of real poverty. PERC found that, as a result of lenders analyzing alternative credit data, credit acceptance rates among Americans earning less than $20,000 a year rose 21 percent. In addition, loan approval rates rose 14 percent among people earning between $20,000 and $30,000 per year.

Using alternative credit data does not involve lowering standards to provide loans. Rather, the information provides additional context regarding people's financial situations. Reaching individuals with either thin or no credit reports requires this level of thoroughness.