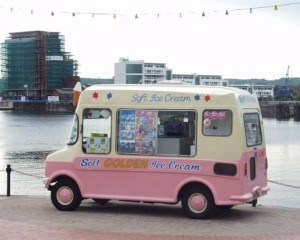 Under a proposal by Brookline, Massachusetts, police chief Daniel O'Leary, town representatives will soon vote on a background screening procedure modification that will extend fingerprint checks to ice cream truck drivers, NECN reports. WHDH-TV points out that in order to run a business in Brookline, every owner is required to undergo a background check. However, fingerprinting isn't mandated, thus preventing the police from accessing the national FBI database. Currently, they are only able to view criminal records from Massachusetts. "We have to be able to make sure that the people aren't committing crimes in other states and coming here," O'Leary told NECN. In addition to ice cream truck drivers, door-to-door salesmen, car dealers and liquor stores managers will also be subject to the new checks. "People are putting trust ... in the town to make sure the people that come to their houses, deal with their children and deal with their service of alcohol are the proper people to do that, and we don't take that lightly," added O'Leary. If passed, the fingerprint checks will go into effect in May 2012.
Background Screening