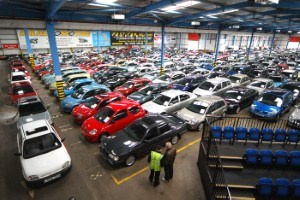 Short term lending has been a booming industry in the past few years. Since the onset of the Great Recession in 2008, many individuals have needed an advance on their funds to make ends meet when an emergency expense like a car accident or medical bill pops up. Though the economy is pulling out of the depths of the financial crisis, a number of consumers still use the options when they're in trouble. As such, more people are taking an interest in pawn shops, partly due to the emergence of reality television shows revolving around shops. others have sought out short term lenders, calling for more options. However, it is car title lenders who have seen a notable rise in storefront expansion and new hires recently. More lending options in multiple cities
There are many different companies that offer consumers car title loans in operation around the nation, where legal. In particular, TitleMax is a very popular title lender, working with consumers who are willing to use their car's title as collateral in exchange for fast cash. Both parties can benefit, as the consumer has access to increased funds and still gets to operate his or her vehicle, while the company can repossess if repayment is not met. Because it's an attractive offer to many, there has been a higher demand, causing the expansion of some chains like TitleMax. The lender has recently decided to open a number of locations in Illinois. "We are proud to bring out services to the residents of Plano, Schaumburg and East Dundee," said TMX Finances senior vice president of operations Otto Bielss. Moreover, TitleMax also recently opened its first store in Desoto, Texas, in order to further service a new pool of consumers.  Popularity leads to higher demand
When consumers demand a good or service, the sector tends to respond by expanding. This has been the case for title lenders - because reports have come in proclaiming the tendency to pursue these loan options, owners responded. According to The Associated Press, data released by the Virginia State Corporation Commission revealed that the industry is booming in the state. The source detailed that in 2011, lenders in Virginia doled out around $125 million in car title loans, which is notable after regulations limited the ability of companies to lend large amounts for a long period of time in 2010.
Short Term Financing